The East Hants Chapter of the YNC visited a maple sugaring operation on Sunday, March 4 in Carroll’s Corner, NS.

The trail took us through beautiful stands of mature hardwoods and down into a gully with a trickling brook, where the main line collects sap to be piped to the sugar shack further down the hill. Around the sugar shack were buckets hung on spiles for collecting sap the old-fashioned way. The kids had fun running from bucket to bucket to see which had the most sap.

In the sugar shack, we learned how the sap is boiled down to make syrup and we all had a delicious sample. 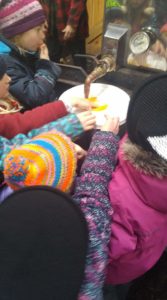 Next stop, just down the trail, was a cabin set beside a quiet pond, where a fire was on and hot chocolate was ready to warm us up. Some of our more adventurous members checked out the trails leading around the pond to see what they could discover.

The syrup we tried was made from a mixture of saps from the red maple and rock maple. We were interested to learn that sap from the birch tree can also make a tasty syrup, though not as sweet and you need almost twice as much sap to make the same amount of syrup as you would from a maple.

We would like to say a big thank you to Pat from Rose Briar Farm for volunteering his time and inviting us to his wonderful property.